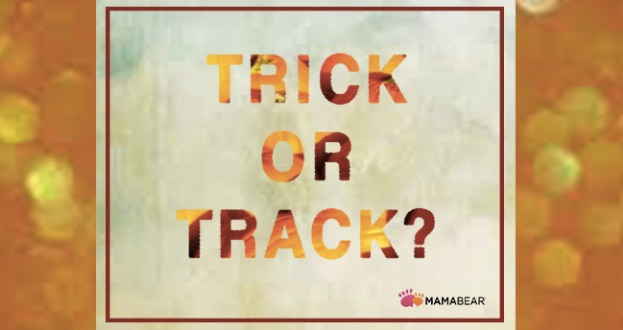 What is your family’s solution for keeping track of your children during this fun Halloween holiday?

Fall is in the air. Everything from lattes and candles to church yards has turned into a pumpkin. It’s time to plan for your Halloween parties, costumes, and trick-or-treat routes. Activities will vary based upon the age of your child. For those of you with teenagers, it’s the time of year where they are between childhood and adulthood. Are they trick-or-treating or attending a Halloween party?

Regardless of which activity they choose, parents are not always with their children. Teens especially will want to be with a group of friends. This may leave parents wondering is their child safe and are they located where they are supposed to be. Do you Trick or Track?

Although mostly a ton of fun, Halloween can pose dangers for teenagers. This is the time of year when teens start attending parties. They are likely to be exposed to alcohol, drugs, and sexual behavior. Underage drinking is very common among teenagers. According to SADD, nearly three quarters of high school students will consume alcohol by the time they finish their senior year. Being on the road is also a hazardous place to be during Halloween. “In 2015, over half (52%) of all highway fatalities across the nation occurred on Halloween night between 6 p.m. Oct. 31 to 5:59 a.m. Nov. 1 and involved a driver or a motorcycle rider with a BAC of .08 or higher (Traffic Safety Marketing.gov).” Knowing these statistics, it’s hard to let your teenager go off by themselves.

GET A SAFETY TOOL

Luckily, there is a solution to help your family. With a location services application like the MamaBear App, you can give your teen the freedom they need, and have the peace of mind you deserve. The MamaBear app gives parents the ability to set up places so they will know when their child arrives or leaves a location. The app also allows you to watch photo uploads on your child’s Instagram and other social media platforms. Be sure to turn on your location sharing to offer your child the security of nearby response time.

Talk to your teen about Halloween safety. To feel good about giving the MamaBear treat of independence, there isn’t any need to trick your teen. Encourage them to share photos and communicate with you via MamaBear to get them comfortable using the app. Make it fun!

ABOUT: The MamaBear App is a leading-edge, mobile, all-in one parenting app that creates a private family communication hub. MamaBear allows you to track your teen’s location, set up boundaries of safe and restricted areas, know how fast they are driving, and monitor their social media messaging. 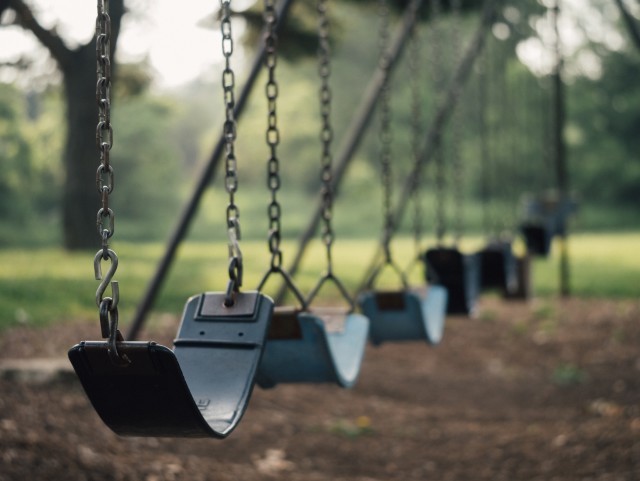 The one word that probably comes to mind for a teen thinking about summer is… freedom.

Summer is the time when strict school schedules fade away, the days get longer, and the sense of liberty feels the largest.

While it is a great feeling for teens, it can be nerve-wracking feeling for parents — and for good reason.

The FBI’s National Crime Information Center, also called NCIC reports that there were over 460,000 missing children reported in 2014, and some officials worry that the number of missing teens can rise during the summer months.

During the school year, teens are wrapped up in a tight, consistent schedule for most of their days and weeks. Parents can use a school schedule to know when and where their children should be.

But in the summer, teens — especially teens that may have their own vehicles or modes of transportation — aren’t as easy to keep track of. When a teen has an inconsistent schedule, it can be difficult for parents to track their whereabouts at all time.

You may think you know where your teen is at all times. But are you really sure they are in their room watching TV or  sleeping?

In the summer, sneaking out into the warm night to hook up with friends can be exciting for teens so parents need to be extra vigilant about securing their house to know if their child slips out during the night.

Parents also need to be extra aware of their teen’s whereabouts if they are going through a tough time. Teens are more likely to run away when experiencing a stressful situation.

According to EmpoweringParents.com, teens are more likely to run away if there is a dispute with their parents, fear of punishment for doing something wrong, or substance abuse problem.

Call Authorities Right Away If Your Teen Is Missing

If you can’t locate your teen, you do not need to wait 24 hours to contact local authorities.

In an interview with the KTAR New in Phoenix, Glendale Police Sgt. Jay O’Neill advised, “There’s a myth that there has to be a waiting period, 24 hours, or whatever it is. There’s no waiting period. We take missing children and other people that are at risk very seriously and so we would encourage people to immediately local law enforcement.”

Stop Your Teen From Being a Statistic

Communicate: Communication is key. Always talk to your teen before they leave the house. Find out where they are going, who they will be with, and what time they will be home.

Give Them Options: Teens are more likely to run away from home after a fight with their parents. If you and your child are having a rough time getting along, consider letting them stay at the house of a close relative, such as a grandparent. That way, the teen won’t feel like they need to run away to get space.

Keep an Eye on Their Social Media: Parents can learn a lot about their teens by checking in on their social media accounts. Use social media to monitor your teen’s plans and online friends. Pay close attention to any conversations about making plans to meet in person — especially if it is a stranger.

To extend the lines of communication between you and your child, you can use MamaBear, the app for Peace of Mind Parenting™. The free app, available for iPhones and Androids, gives parents tools to monitor the location of their child using GPS and sync up with their social media accounts.

With MamaBear, you and your teen can get back to enjoying a safe and free summer! 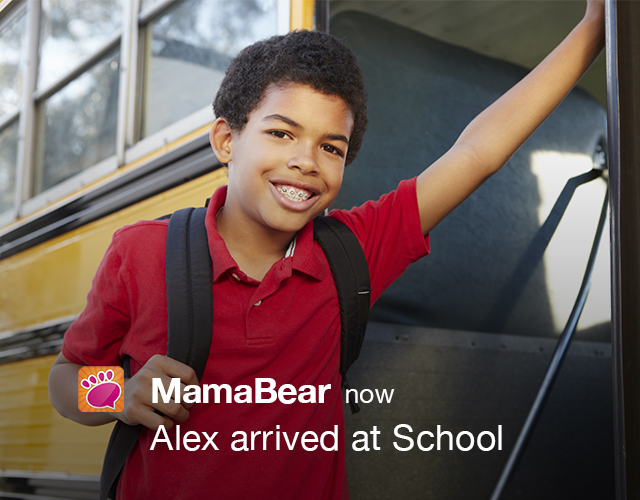 When you give your kids the freedom to take the bus, walk, or ride with friends to school, it can be a little unnerving. You send them to school for the day, but you don’t actually see them walk through the doors.

Without confirmation that their kids made it safely to school, many parents are left with a series of uneasy thoughts. Those feelings can be even worse if the child was supposed to send a text and check-in but forgot.

There’s plenty to worry about during the school year. Concerns about your kid getting to and from school shouldn’t be one of them. So MamaBear Family Safety App created a system that automatically notifies parents when their kids make it to their destination — without any effort from the child.

The free app takes the stress out of school travel, and it’s easy to set up.

How to Set Up Location Alerts on MamaBear

From your child’s phone:

Related: Getting Started With MamaBear App

Once you go through these steps, MamaBear will take it from there. The app uses GPS and combined location services on your child’s phone and automatically sends messages to you when your child arrives at or leaves one of the saved locations.

How to Protect MamaBear App From Being Deleted

Locations alerts only work if the MamaBear app is installed and logged in from your child’s phone. It will not work if the app is uninstalled.

To make sure that the app is not deleted, you can add a password to set a restriction on removal for iPhones. Android users will need to explore other parental control options.

With the help of MamaBear, parents can give their kids the freedom to go to school by themselves without having to call or check in when they reach their destination. It offers parents peace of mind knowing that their kids are at school and making it home safely.

Give you and your kids one less thing to worry about this school year, and download the MamaBear Family Safety App.

Thanks for using the MamaBear App.  We’ve put together a step-by-step guide to help you get started. Get in touch with us at support@mamabearapp.com with any questions.

Add your children and any other guardians to your account in the settings area.

Your added family members can install MamaBear from the Apple App Store or Google Play Store and we’ll also send them a text message invitation asking to join your family.

2. CONNECT WITH YOUR FAMILY.

Once your added family members have installed MamaBear, they’ll simply need to log in using their phone number and the family password you created.

Share your password and give your kids a hand if they need help installing MamaBear on their phone.

You can resend the login link when you see that your child has not logged in for the first time or if their map location is old. Go to your child’s profile settings page and tap “resend login link.”

– Location services “on”
– Background refresh “on” (for iPhones)
– Make sure wifi is “on.”  Even if not connected, having wifi on helps the device’s location services.
– The device also needs to be powered on to share updated location information.

Related: How to prevent your child from deleting apps

4. GET YOUR CHILD’S SOCIAL USERNAME AND PASSWORDS.

Once you are connected:
– Customize a word list to monitor on all connected social accounts by tapping “restricted words.” Check out these acronyms you may want to add to the list.
– Notifications for new Twitter followers.
– Notifications for Instagram photos posted.
– Select what notifications you would like to see of your child’s activity on the Grom app.

Add places like home or school in the settings area of each child to receive notifications when they arrive or leave. Adjust the size of the boundary to fit the location in the safe place settings to prevent “bouncing” or inaccurate departures.

The default setting for driving speed notifications is 55 MPH.  You’ll receive notifications if your child rides or drives over that limit once per hour.

Earn a free premium subscription when you share MamaBear with your friends using the Bear2Bear referral program. Tap the top left menu and tap “share” to choose among text, email or social apps to share your custom referral link.  As soon as your friends register, they receive a free premium subscription period and so do you! Learn more about Bear2Bear.